The unparalleled growth in home prices over the past year is expected to slow further, with the pool of buyers not deep enough to absorb the amount of stock sellers are likely to unleash once the lockdowns end.

Buyers are already being left behind by the rapid escalation in prices, according to CoreLogic.

While the housing market has remained resilient despite the delta outbreak, it has already started to cool, with national home dwelling values rising by just 1.5 per cent in August – the slowest pace since January when it rose by 2.8 per cent, the CoreLogic home value index shows.

Over the year, the median home value nationwide soared by 18.4 per cent – the fastest growth in 32 years.

CoreLogic research director Tim Lawless said the slowdown in the monthly growth pace has more to do with worsening affordability constraints than ongoing lockdowns.

“When you look at the wages growth figures rising about 1.7 per cent per annum, and the fact that national housing values rose more than 18 per cent – that’s 11 times the rate of wages growth, so it stands to reason that fewer people are going to have access to the deposits needed to enter the marketplace,” he said.

“We’ve already seen the number of second-home or subsequent buyers start to fade and first home buyer activity has been trending lower since late last year as stimulus wound down, so there are signs that demand is slowing.”

Housing finance data shows the number of people buying their second or subsequent homes has slowed from a peak of 24 per cent during the October quarter last year to less than half, at 10 per cent, in the three months to June, Mr Lawless said. 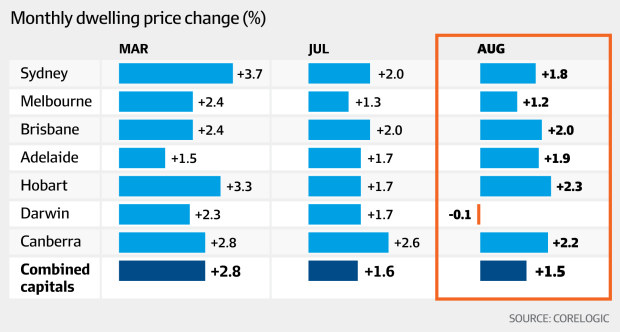 CoreLogic has withheld the Perth and regional Western Australia index results pending the resolution of a divergence from other housing market measurements in WA.

Mr Lawless said while demand from local buyers has supported the housing market during the pandemic, it may not be enough to plug the hole left by the lack of international migration amid the border closure.

“We know that roughly 40 per cent of migrants coming into Australia pre-COVID-19 were permanent migrants, and they tend to rent first before gradually buying a home, so arguably with borders remaining closed for so long now, the impact is flowing through to less buying activity,” he said.

“Until we start to see signs that international borders may reopen, which looks like it’s some time away, I don’t think we’ll see replenishment of that level of demand.

“So at this point, local demand is diminishing, and not surprisingly. Where’s the new demand going to come from?”

And if the flood of new listings do eventuate once the lockdowns are lifted, the lower demand may help rebalance the market, Mr Lawless said.

“If I’m right, and we do see a bounce back in new listings, we may not see demand rise at the same rate, partly because demand hasn’t been interrupted as significantly as listing numbers, so there’s not as much pent-up demand,” he said.

“So if the lift in listing numbers is not met by a rise in demand, it could be another sign that this upward growth in housing prices will be dampened a bit further.”

This could also mean better conditions for buyers who have been pressured to offer higher prices due to fierce competition.

“I think this will help rebalance the market, which is a positive outcome,” Mr Lawless said.

“It’s been a seller’s market for a long time and buyers are still feeling this sense of urgency that’s supporting upwards pressure on housing prices.

“But as soon as we start to see listing numbers rising against lower demand, then I think that’s a pretty clear sign that we’re probably starting to see a bit more normalisation coming back to the relationship between buyers and sellers.”

This article is from Australian Financial Review, please click the following link for the original article: https://www.afr.com/property/residential/weaker-demand-higher-stock-to-slow-house-price-growth-20210901-p58npj